About 1.5 million people visit Haleakala National Park each year, and almost all take in the view from 10,000-foot-high Red Hill Summit (often shrouded with lower-lying clouds). And maybe half the people at least take a gander at Sliding Sands Trail, which drops a few thousand feet into the 19-square-mile volcano's crater (technically an eroded valley) that is filled with cinder cones and geologic oddities. But practically no one (seriously) knows about the Skyline Trail, which drops down the east flank of the volcano, past many cinder cones, and (unlike other trails) has ocean views all the way.

For one, the Skyline Trail is in an adjacent state park, and not shown on the visitor's map. And secondly, the trailhead, though only a half-mile from the White Hill Visitors Center, passes the research facility of Science City (shown above), where 'No Tresspassing' signs confuse and ward off most visitors. 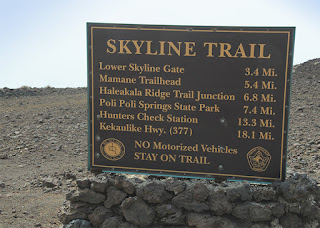 But the trailhead sign is just around the bend. The trails lead down to Poli Poli Springs State Park in the Kula Forest Reserve. You can also take a rural road that climbs (and climbs) to Poli Poli from the highway in Kula. 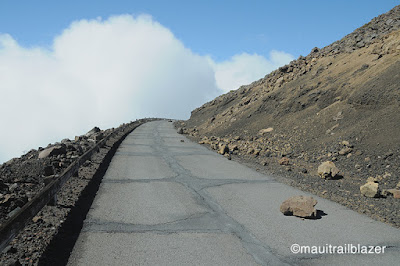 The first .5-mile of the trail is a paved road that used to be open to vehicles. Frequent rockfalls made this a risky propostition. BTW: Bicycle riding down the Haleakala Highway is a popular tourist activity. But the real thrill is the Skyline Trail, free of cars with spectacular scenery. 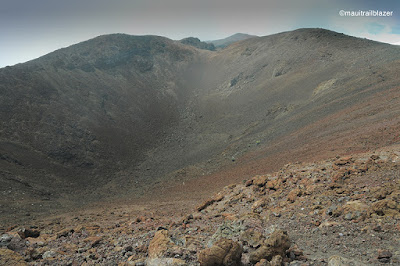 Hikers will pass cinder cones (called pu'us) at the beginning of the trail. It's easy walking, a steep descent over red-and-blonde rubble that eventually merges with the forests and trail-network of the state park. Poli Poli State Park was hammered by fire, wind, and rainstorms in recent years, but it's open again. Restoration efforts have improved the roads.
Maui Trailblazer has more details on trails in Haleakala National Park and the Kula Forest Reserve. The new Maui Trailblazer E-book is now available on Amazon.