Pedaling the Coconut Coast of Kauai (the east shore) has quietly become one of the top attractions in the state. Decades in the making, the Ke Ala Hel Makalae ("path that goes by the coast") swerves a dreamy dozen-or-so miles, from the wild beaches in Ahahola to the north, through the beach cottages of funky Kapa'a Town, and ending (for now) at the huge family fantasyland of Lydgate Beach Park.
The heart of the path, in Kapa'a passes several beaches, including Pono Kai Beach, so bring your snorkel and fins along for the ride. 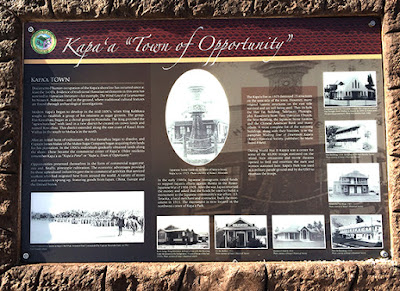 Intrepretive signs accent the route, telling of the town's past lives as a pineapple center and sugar cane grower. A half-dozen new, Decco footbridges cross canals, streams and ravines—including the slick new bike lane across the wide Wailua River from Kapa'a to Lydgate, which used to be a major pain for cyclists at this busy T-intersection. 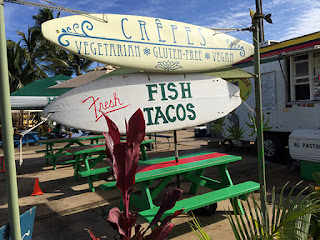 There are plenty of place to hit the brakes for eats and beverages, both in Kapa'a and at the Coconut Marketplace. 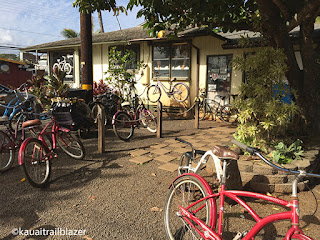 Beach cruiser bikes may be rented at several places in and around Kapa'a. A good choice is Coconut Coasters, centrally located and right on the path. They offer a range of wheels, including three-speeds with nice cushy seats.
Although the official path doesn't go much farther north of Donkey Beach, adventure seekers can continue on old cane roades and paths past cute House Beach, and all the way to Anahola. On the south end, you can ride beyond Lydgate on a sandy side road several more miles to Kauai Beach.
Kauai Trailblazer has all the details on the Kapa'a Coastal Bike Path, as well as many other rides on the Garden Island—by far the best cycling island in Hawaii, and one of the top spots in the world for mountain bikers.